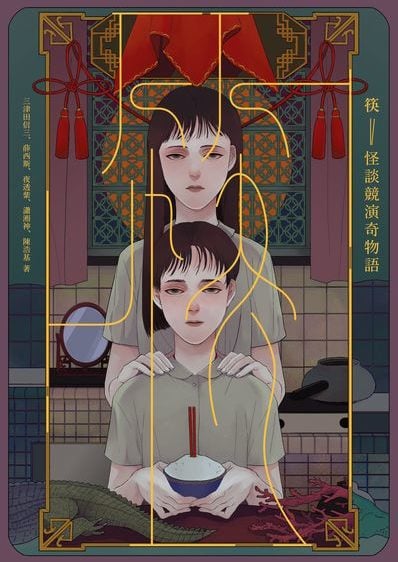 The first book in Chinese detective publishing with writer collaborations from Taiwan, Hong Kong, and Japan.

In Japan, a girl sees her classmates poke a pair of chopsticks into a bowl of rice, and make wishes to “Chopsticks Master”. The eight-day ritual has to continue for 84 days. If the Master agrees to help, he will send a notice, but don’t let him “find” you. In Taiwan, a boy has a silver necklace with a pair of coral reef chopsticks. It’s said that a Tang Dynasty celestial in the chopsticks will bring you happiness and marriage. In Hong Kong, people put a bowl of rice and a pair of chopsticks beside puddles as curses, to send people they hate to the afterworld for the wedding of ghost bride.

Later, their wishes come true. People fall in love, and people they hate are gone. However, what is the price for dreams coming true? Who pays the price?

The Japanese girl has nightmares of being hunted. The Taiwanese boy loses one of his chopsticks. The ghost bride in Hong Kong is transformed into a grudge online. In a dim room we don’t know when or where, a prostitute is talking about her life to a client. It’s a confession of murder. It’s the story of a curse linked to a pair of chopsticks.

Hailinzi: A young Taoist priest and detective in Taiwan with unusual red birthmarks that look like fish scales on his arm.
Lina: A YouTuber in Hong Kong whose boyfriend dies during livestreaming. As she tries to uncover the truth, she is haunted by a ghost bride.
Amamiya: A Japanese who has summoned Chopsticks Master, and participated in a slaughter in dreams to realize her wishes.