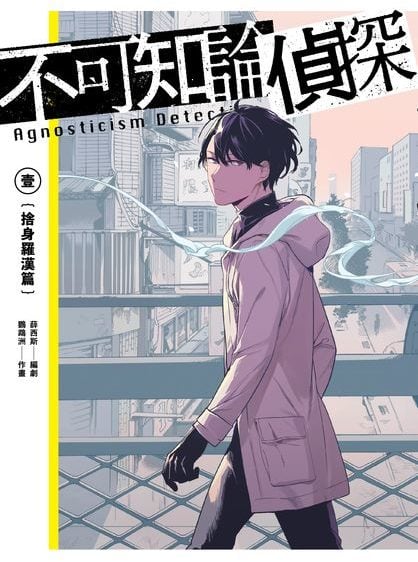 The first comic in Taiwan about Taoist priests/detectives and folk culture.

In rituals to bless construction works, people dress up sacrifices as deities, with a wok on their heads, straw sandals on their feet, and golden armor on their bodies. The sacrifices are then buried alive, and become ghost kings that suppress other spirits.

A male body appears in an abandoned temple at a park. Covered by talismans and unusual clothes, the decomposing body has been bitten by stray dogs. A few days later, a female body floats in a lake in yellow Taoist priest clothing. Some people speculate that she has been taken by ghosts, while others assume it is a living sacrifice for construction works nearby. Without convincing clues, law enforcement suspects there may be a serial killer.

Followed by a mysterious evil spirit, a young Taoist priest can see the afterworld and invisible forces. He is invited by law enforcement to assist in the investigation. He looks through clues in these unresolved cases calmly and rationally. Compared to murders, though, he is actually more interested in the “talismans” on the corpses.

An unconventional detective or Taoist priest, Hailinzi participates in his first police investigation, but certainly not his last. Later, he will encounter more unbelievable mysteries and crimes that may be related to supernatural forces in Taiwan.

Hailinzi: A young Taoist priest and detective in Taiwan who does not believe in God. He has unusual red birthmarks on his arm that look like fish scales, and he is followed by a mysterious evil spirit. He always prioritizes reason.
Wu Shuang: A calm and kind police officer who often brings cases for consultation. He also assists Hailinzi during investigations.